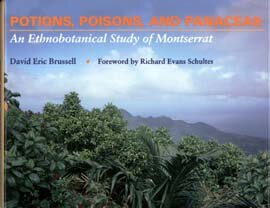 Everything you ever wanted to know about the flora of the Caribbean island of Montserrat, and more, is in this book. More than a catalog of plants, Brussell has given us a view of how these plants have been and still are being used by the people of the island. Here we must make a space and fill it with a percentage figure that we think might be appropriate for the number of people who actually do what the informants have said they do with some of the plants they have identified or described since neither they nor Brussell makes such estimates for us. Although ethnobotany is a 50-year old. interdisciplinary specialty, the reliance on interviews with "informants" makes me wonder about the field as a science. Should an ethnobotanist or an anthropologist tell us about statistical things

Richard Evan Schultes (Harvard University, Emeritus) wrote about ethnobotanical conservation in the Forward and reminded us that it has been recognized as an important and valuable adjunct of environmental conservation. "The knowledge of the bioactive properties of plants amassed over the millennia by peoples in primitive societies, whether they be Indians or simple country folk, is fast disappearing with increasing 'westernization' in many, if not most, tropical regions." In Montserrat, the Amerindians (~50 AD), the more recent Arawaks (~400 - ~600 AD), and the Caribs (thus the name Caribbean Islands) were the first settlers. The fierce, cannibalistic Caribs had driven the Arawaks out of the island. There are no Caribs living on the island today. For various reasons, the original Indian peoples were systematically exterminated.

Christopher Columbus and his crew sighted the island (1493) and named it after a mountain in Spain (near Barcelona). The first Europeans to settle there were British (1631) and Sir Henry Colt has written of that experience:

"I have neuer felt soe moyst an ayre. All thinges rust, ye verye
keyes in our pocketts rust, and a nights ye clothes of our backs
in touch is moyst, & stiff. We are moor drowsye and sleepy than
accustomed, & full of dreams."

It felt that way when I first drove through Southern Illinois from St. Louis, on Highway 3, along the Mississippi River to Cairo, and from there on to Montgomery, Alabama. It was in 1951; a time of no air conditioned cars. Since 1960, when I became a member of the Department of Botany in Southern Illinois University at Carbondale, every summer day in Carbondale feels like the one Colt described.

In 1832, the British sent Irish Catholic dissidents from St. Kitts to Montserrat. Scotch settlers also were settled on the island but were far outnumbered by the Irish. In 1672, the first Africans were brought to the island as slaves to work in the sugarcane fields. They were emancipated in1838 and began their own subsistence farms. After 1850, limes were an important export crop for the island (as tobacco and sugar had been earlier). The intermarriage between Caribs and Africans is believed to have occurred in the past. The present population on the island is of "black African descent. There is also a small minority of Caucasian expatriates from the United States, Canada, Great Britain, and other European countries. Some East Indians and Middle Easterners also now live on the island." This is no easy ethnological continuum to analyze. In 1973, about four years before the major collecting effort for the study was started, there were about 12,500 living on the island, about 3000 living in Plymouth, the capital. Thus, it is as Schultes has stated: "The publication of this book is a valuable contribution to the development of Caribbean ethnobotanical investigations."

Let us venture to meet the present inhabitants with Brussell. We will watch him use his methods of field research. We will begin to appreciate the breadth of his knowledge as he identifies the individuals in the flora. Then we will watch him complete his work on voucher specimens. Schultes refers to Brussell's "outstanding personality and unusually expert training in ethnobotanical investigation." He should be in the American tropics doing research! Where is Brussell In Niigata, Japan teaching biology and gaining new experiences (adjunct assistant professor of plant biology at Southern Illinois University at Carbondale). J.-P. Theurillat, Conservatoire Botanique, Geneva, Switzerland states in the Preface that Brussell has made a significant contribution because his informants "allowed him to locate and study a greater number of plants than would have otherwise been possible, gave him access to a mine of information about local medicinal and domestic uses of the plants, and also introduced him to folkloric aspects of Caribbean culture, such as voodoo."

While most of the plants that Brussell describes are from the tropics, some originate from the temperate regions of the Old and the New World. Brussell lists 378 species in his collection (see Appendix) with 1 to 10 specimens of a given taxon; 80 percent being three or less. Forty-three references were cited and the index of common names exceeds 500 entries. He uses 52 black and white photographs and 24 color plates in the book. The Introduction and Description of the Study Area is very interesting. Brussell backs away from recommending any ethnobotanical uses listed and refuses to be "held liable for the efforts of anyone who employs them." --- "Positive identification" of plants described in the book "should be made only with the aid of an expert." Theurillat continues: "---it is not the least merit of the book that the many plant utilizations it documents enliven the sometimes austere ways of systematic botany teaching."

Ethnobotanical Uses and Specific Discussion (pp. 15 - 132) makes up the bulk of the book. Here we go alphabetically from Acanthaceae through Zygophyllaceae. I'm always amazed at the number of plants people claim can be used to make a tea that is good for a person with a cold. I never doubt that this is so (in the presence of the informant). Yet of all the decoctions, etc. that I have tried, none seem to shorten the time to get back to normal. I have a concoction of lime juice (as in Brussell's book) that I use but I add a little bit of a popular cola soft drink and some rum to it. But like Brussell, I perform this for scientific purposes (dose response curve). In addition, due to the poisoning properties of some of the thing that I have been told are good rums, and the possibility of adverse reactions of those with good flavor, I can not bring myself to divulge my recipe.

Brussell has the gift of getting people to tell him about the treatments they and their relatives use to get rid of their worms, to end an unwanted pregnancy, to induce temporary sterility, to cure "social diseases", to poison fish and friends, to put into someone's drink some potion that will make the imbiber love you, to be an antidote for eating bad fish, to treat diarrhea, and to make a grandfather able to pass "water" more easily when he wakes up in the middle of the night. As to the hallucinogenic properties of some of the plants mentioned, it should be said to musicians and singers alike in the ethnobotany class; if you go that route to improve your stage presentations, don't give up your day job at the local herb store.

Time can stand still while we prepare a manuscript for publication and wait for it to clear the printer (as did Brussell), but it doesn't stand still for the few people that know their plants, potions, poisons, and panaceas. The evils and diseases released into the world by Pandora, the first mortal women, might be treated by "those in the know". Remember, it has been said that the last thing out of Pandora's box was hope. As long as people sit around and hope that some one is out there gathering data and saving the environment, the ones in the "know" are aging and dying. Ah. There is no cure for it. We need to conserve ethnobotanicals and the environment. We need people like Brussell to teach students how to do ethnobotanical research in the field.

Brussell presents an interesting book to us. Since his work on the island, it has experienced volcanic damages (due to pyroclastic flow), and its population has been dislocated. It may be that Schultes' remark about the need to study the American tropics should somehow be linked to a grant that sends Brussell and his talents back to Montserrat. To my knowledge, no ethnobotanist has had such an opportunity. A modern Vesuvius!

You used Don Blandings poem to introduced your book. Let me select a few points:

---island of rumba and rum, ---mystery-cities and haunted seas,---witching moons,--- vanished people,---whisperings---valleys and swamps and groves---to the place I know I'm going to go.

This illustrated review was prepared by Aristotel Pappelis, Professor in the Department of Plant Biology, Southern Illinois University, Carbondale, Illinois 62901.