Cellulase is important enzyme required for catabolism of cellulose into smaller sugars in the animal metabolism. Cellulose is plant polysaccharides and contained higher range of sugar moleculs those with help of suitable enzyme and microorganism can be used for conversion of sugar into biofuels to meet the requirements of energy. In the present study Cellulase was produce from corn straw by solid state fermentation with the help of Trichoderma. Reesei. The corn straw was supplemented with wheat bran for supply of essential elements ( N and C). The optimal experimental conditions like temperature, pH, time total water contents of substrate were selected for this study. It was observed that cellulase shows its maximum activity at when corn straw and wheat bran ration is 1:1 (water contents ratios 1:2 ). The optimal temperature 28oC, pH 5.5 and time duration for maximum activity was 72 hours. Furthermore the fermented activity of FPase 119.41 U followed by CMCase 452.5 U was observed in the present study.

Corn is an important crop in all over world including People Republic of China. Total annual production of corn increased than 0.62 billion tons every year. The main uses of corn include food and feed, production of cocking oil and many others. However, corn straw is used for only for feed of animals and fire purposes in the rural areas of most of countries of the world.

Biotechnology of cellulase and hemicellulase began in early 1980s, first in animal feed followed by food applications (Chesson, 1987; Thomke et al., 1980; Voragen. et al., 1980, 1986).Subsequently, these enzymes were used in the textile, laundry as well as in the pulp and paper industries (Godfrey 1996; Wong and Saddler, 1992, 1993). However, since last two decades, the use of cellulases, hemicellulases and pectinases has increased considerably, especially in textile, food, brewery and wine as well as in pulp and paper industries (Godfrey and West, 1996b; Harman and Kubicek, 1998; Saddler, 1993; Uhlig, 1998). Today these enzymes account for approximately 20% of the world enzyme market (Mantyla et al.,1998), mostly from Trichoderma and Aspergillus (Godfrey and West, 1996b; Uhlig, 1998).

It was reported by many authors that Trichoderma reesei is capable of increase the production of cellulase from substrate like corn straw and similar others. Trichoderma. reesei can be chosen as model fungus as it shows both the challenging rheology and a cellulase complex product that is shear- sensitive.( Weber, 2005).

Cellulose, which is a polymer of glucose is the primary structural component of most plant cell walls. Although this polysaccharide is the most common carbohydrate on earth, relatively few animals are able to utilize this resource efficiently (Goodenough and. Goodenough, 1993) .Utilization of cellulose as a nutrient source requires enzymes that cleave -1,4 glycosidic bonds between constituent sugars. The enzymes referred to as cellulases, are required to split -1,4 glucosidic bonds in the polymer to release glucose units ( Barr et al, 1996). In living organisms, cellulase activity represents a system of enzymes that act synergistically to degrade cellulose. The system includes endoglucanases (EC 3.2.1.4) which hydrolyse -1,4 glucosidic bonds randomly.

Most higher animal species lack the genes that encode enzymes capable of degrading plant cell wall polysaccharides. Herbivorous vertebrates, however, have evolved digestive systems which contain symbiotic microorganisms capable of degrading these compounds (Goodenough and Goodenough, 1993). The strategies employed by invertebrates to digest cellulose, however, are less well understood.

Ethanol is an alcohol made from the fermentation of the carbohydrate or sugar fraction in biomass (plant) materials. Over 95 percent of the ethanol produced in the different countries including United States today is manufactured by dry or wet milling processes. These are relatively simple processes: corn grinding and starch separation, saccharification, fermentation and distillation.

Therefore present study was undertaken with following aim and objectives.

1. To find out cheapest source of cellulase production

2. To assess the corn straw for high production of cellulase

3. Effectively utilization of Trichoderma reesi for production of cellulase

4. Assessment of solid state fermentation for production of cellulase from corn straw 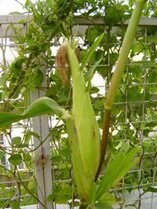 The dried samples of corn straw were grounded into powder form and were kept in plastic bags at 4 for further uses. During present experiment corn straw samples were supplemented with equal amount of wheat bran.

(i) Media for growth of Trichoderma. Reesei

For the growth of fungi (Trichoderma. Reesei); Total of 200 g of Potato chips ( without skin) were added with 1000 ml of water, boiled and filtered. Moreover, 20 g of agar and 20 g of dextrose were also added and sterilized at 121 for 20 minutes.

Trichoderma reesei was obtained from the Microbiologial Department of Science and Technology University of Tianjin. The organism was subcultured every month for used in this experiment and was stored at 4.

For second test, a 2 ml of solution (containing 1 g of CMC ,100 ml of buffer, 0.2 M HAC- NaAC) having pH 4.8 was taken in 5 test tubes and was added 2 ml of CMC- NaAC buffer. The tubes were kept in water bath at 50 for 5 minutes. Further added 1 ml of cellulase and warm in water bath at 50 for 30 minutes. Finally 3 ml of solution (in section iv) was added. The absorbance of FPase CMCase was measured at 540 nm with spectrophotometer (T6). Furthermore a calibration curve was prepared to show activity of dextrose and cellulase. Similar procedure was repeated five times to get required data which was analyzed statistically for averages and standard deviation values.

The experiment was completed in 6 stages in which Sample of corn straw (5g) along with wheat bran (5 g) was mixed up with 2 ml bacteria culture media ( 1.7-2x10 6 cell/ml)

(6) Orthogonal study of three factors (Temperature, pH and duration) was carried out to select optimal condition for production of maximum amount of cellulase..

Data obtained after anlaysis in the experimental work is given in the tables 1-6; whereas comparsion of these parameters are given in Figs 1-5.

Data in Tables 2 and 3 shows result of different temperatures and pH at time period of 72 hours. The comparison of these different degrees of temperature and pH are given in Fig.2 and 3.

The results of total water contents of substrates are at 28 for 72 when the pH was 5 was studied (Table 4). Whereas comparsions are given in Fig.4, the suitability of corn straw and wheat bran ratio is given in the table 5 and Fig.5.

The comparsion of Temperature, pH and Time duration was studied (othrogonal studied) in order to create suitable condition for production of maximum acitivity of cellulase (Table 6).

Table 1. The effect of fermenting period for CMCase and Fpase during different invervals of time.

Fig. 1. The Comparsion for Fermenting period of CMCase and Fpase.

Table 2. The Effect of Temperature on Fermentation carried out by CMCase and FPase.

Fig. 2. The Comparsion in Fermenting Temperature for CMCase and Fpase.

Table 3. The effect of initial pH on the activities of CMCase and FPase.

Fig.3. The Comparsion in effects of initial pH on CMCase and FPase

Fig.4. Comparsion in water contents ratio of corn straw for CMCase and FPase.

Fig.5. Comparsion between wheat bran and corn straw ratio for CMCase and FPase

Table 6. Orthogonal Study of three Parameters for CMCase and FPase.

It was observed that maximum production time for cellulase is 72 hours at pH 5.0 This is time when cellulase show maximum activity in substrate like corn straw. The results obtained in the present study about the activity of cellulase were higher than, 5.5 U and 4.0 U cellulase activity in FPase reported by Kalogeris et al. (2003) and Xu et al. (2002).

Result showed that 28oC was suitable temperature (at pH 5) for maximum cellulase activity when other conditions are favorable (Table 2 and Fig.2) The suitable temperature found in the present study was slightly higher than 25oC at 6.7 pH reported by Wen et al.(2005) and 30oC at pH 4.5 reported by Yang et al. (2004). However, values obtained always depend on the nature of substrate used for production of cellulase.

Where as the ratio of total solid and water contents were found 1:2 those were more reliable for maximum activity of cellulase (Table 4 and Fig. 4). The increase or decrease contents could effects activity enzymes (Chundakhadu, 1999).

It was observed that suitable ratio for corn straw and wheat bran was 1:1 and this ratio can provide sufficient cellulase activities. (Table 5 and Fig.5)

The orthogonal study of three parameters like temperature, pH and time duration show that the most favorable condition for maximum activity of cellulase was 28 oC at pH 5.5 and time duration of this study was 72 hours (Table 6)

Cellulase production from corn straw with fungi like Trichoderma reesel through solid state fermentation is important because in this way production of cellulase can be increased, which further help to produce cellulose. This an important enzyme required for breakdown of polysaccharides into monosaccharide, those can further converted into ethanol and other alcohols through fermentation process. Cellulase have a lot of industrial applications including production of food and medicines and help to breakdown the waste plants materials to clean up the environment.

It is therefore concluded that by using different parameters study in this experiment high yield of cellulase could be obtained. It is expected that production of cellulase will increase manifold in future to meet the future requirements.