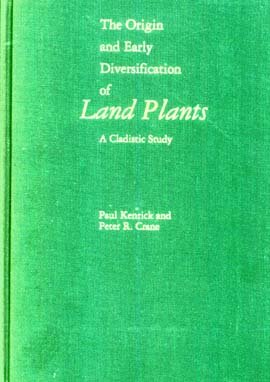 In my opinion, every student can benefit from a careful reading of the first and second chapter. Since many ethnobotanist are trained in taxonomy, this background will assist you to carry on discussions with them on a wide set of topics, such as: the five kingdoms in a phylogenetic context. I follow the proposal of Woese et al. 1990: Domains Archaea, Bacteria. and Eucarya as modified by Pappelis and Fox 1995 (Pappelis, A. and S. W. Fox. 1995. Domain Protolife: The protocell theory, In Evolutionary Biochemistry and Related Areas of Physiocochemical Biology, B. F. Poglazov, B. I. Kurganov, M. S. Kritsky, and K. L. Gladilin, eds., Bach Institute of Biochemistry and ANKO, Moscow, pages 151-159; and, Pappelis, A. 1997. Study Guide for Individualized Learning Program History of Biology 315-2, Southern Illinois University at Carbondale, Carbondale, IL 62901, 200 pp.). "From an ecological perspective, the evolutionary patterns underlying the origin of a land flora are central to understanding the initial assembly of terrestrial ecosystems and therefore the evolution of those groups of animals that are characteristic of terrestrial environments (e.g., insects and tetrapods" (p. 1, par. 1). The aim of this book is the resolution of the evolutionary patterns among "basal" groups of land plants.

The pivotal events in plant evolution are the emergence of the green algae, the transition to land plants, and their early diversification (to bryophytes and pteridophytes). This enables us to appreciate the "monophyly of vascular plants" (p. 306, Systematics, line 14). The origin and early evolution of land plants extends many aspects of aquatic green algal ancestors (biochemistry; ultrastructure) into land plant morphology (supracellular homologies among the major organ systems).

More than a century of thought was required to develop the current theory on land plant phylogeny: Hogg, 1860; Haeckel 1868; Hofmeister 1869; Celakovsky 1874; Pringsheim 1878; Bower 1890; Haeckel 1894; Lignier 1903; Bower 1908; and, Fritsch 1916 (see Bibliography pages 387 - 422). "The most explicit early phylogenetic scheme for land plants is that of Haeckel (1868), --" beginning life in the Protophyta (Figure 1.1). Hogg had started the discussion with the term Protoctista ("organisms neither animal nor plant"). Haeckel (1966) subsequently recognized animals, plants, and "protists" (organisms that could not be classified as plants or animals) as the three main branches in his classification system ("tree of life"). The distinction made between prokaryotes and eukaryotes (Chatton, 1925) was incorporated into a four-kingdom system by Copeland (1956: Monera, --the prokaryotic organisms; Protoctista, --the protists, higher fungi, and alagae except chlorophytes; Animalia; and, Plantae). Whittaker (1959) distinguished five groups: Monera; Protists; Fungi; Animalia; and Plantae. The evolutionary tree would begin with Monera from which Protista would emerge as nucleated organisms. From these, the plants, animals, and fungi would arise. Other schemes have been proposed but the only one that seems destined for wide adoption is that of Woese et al. (1990) that proposes three main branches to describe the tree of life: Archaea and Bacteria (prokaryotic cells) and Eucarya (evolving from the Archaea and later supporting bacterial endosymbionts, mitochondria and chloroplasts).

The fast-moving field of molecular genetics is about to resolve most, if not all, of the phylogenetic problems we see in the plant literature. Whether one-celled plants will be classified in the plant kingdom or in the protists remains to be seen. The tendency is to classify multicellular organisms as fungi, animal, or plant kingdoms (although there are systems having great numbers of kingdoms). The authors suugest that green algae are more closely related to the embryophytes (ultrastructure and biochemical features) than to any other group. "Therefore, following Copeland (1956), we regard the plant kingdom as encompasing both groups. Cladistic relationships are presented (Figure 2.7). The reading is interesting and goes back to the time when the cell theory was being formulated (Harvey 1836).

Though we do not see one-celled plants as playing a big role in ethnobotany, their overall importance to the support of life is beyond description. Maybe we need to be more willing to be ethnobiologists.

The approach used to study to lower plants is similar to that used to study relationships among major groups of seed plants (e.g., Crane 1985; Doyle and Donoghue 1986, 1992; Nixon et al. 1994) "and is guided by the same basic philosophy of treating living and fossil taxa together as part of a comparative analysis using cladistic methods. Enjoy the chance to gain a good foundation for more interesting work in the field and for discussions around the many kinds of tables you will encounter in the years to come.